As part of a medical team, physical therapists specialized in pelvic health can assist in improving and potentially eliminating the following conditions:

Discomfort that occurs in the lowest part of the torso, the area below the abdomen and between the hip bones

Chronic vulvar pain without an identifiable cause

Pain in the pubic symphysis (joint in front of pelvis) due to instability or injury to the ligaments. Can commonly occur during pregnancy or postpartum.

When the bladder herniates into the vagina. Symptoms include feeling pressure in the pelvis and vagina, discomfort when straining, and feeling that the bladder hasn’t fully emptied after urinating.

Loss of stools beyond one’s control

Ehlers-Danlos syndrome is a group of inherited disorders that affect your connective tissues primarily your skin, joints and blood vessel walls.

Ehlers-Danlos syndrome is a group of inherited disorders that affect your connective tissues primarily your skin, joints and blood vessel walls.

Congenital abnormal hip anatomical variations that result in reduced containment of the femoral head within the socket.

Pain within the area of the sacrum and sacroiliac joints at the base of the spine.

Leaking of urine during activities such as coughing, sneezing, laughing, or exercising

Having an abnormal increased urge to urinate that can cause increased urinary frequency. Sometimes leakage of urine will occur before you make it to the bathroom.

Painful spasmodic contraction of the vagina in response to physical contact or pressure. Commonly occurs during sexual intercourse

Separation of the abdominals, the rectus abdominus

When the end of the large intestine (rectum) pushes through the back wall of the vagina. Symptoms include a soft bulge of tissue in the vagina that may or may not protrude through the vaginal opening. It may also cause difficulty with having a bowel movement.

When attempting a bowel movement, the rectal pelvic floor muscles contract instead of lengthen appropriately.

A chronic condition that causes thin, white patches of skin, usually in the genital area.

A condition that causes discomfort or pain in the bladder and a need to urinate frequently and urgently.

Physical therapy as part of the medical team can assist with healing and regaining function post the following pelvic surgeries or procedures: 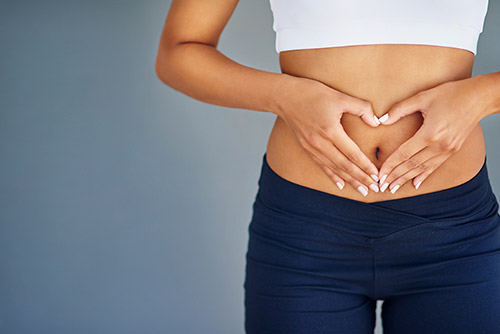